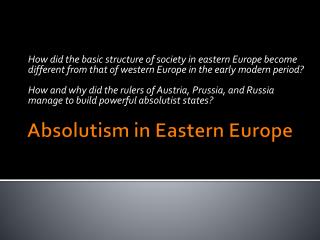 How did the basic structure of society in eastern Europe become different from that of western Europe in the early modern period? How and why did the rulers of Austria, Prussia, and Russia manage to build powerful absolutist states?. Absolutism in Eastern Europe. I. Geography of Eastern Europe.

Age of Absolutism - . world history ii. age of absolutism. towards the end of the middle ages, feudalism broke down. one

Central and Eastern European Absolutism - . juxtaposition of eastern and western europe. prussia and austria. both turn