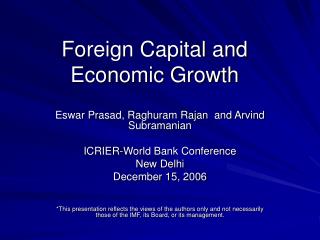 Foreign Capital and Economic Growth. Eswar Prasad, Raghuram Rajan and Arvind Subramanian ICRIER-World Bank Conference New Delhi December 15, 2006 *This presentation reflects the views of the authors only and not necessarily those of the IMF, its Board, or its management. Outline. ECONOMIC OUTLOOK - . may 2013. economic outlook is revized in the 1st and the 3rd weeks of the month. recent update:

ECONOMIC OUTLOOK - . december 2012. economic outlook is revized in the 1st and the 3rd weeks of the month. recent update:

Foreign Direct Investment - . question for today: why does investment capital flow from some economies to others?. why

The economic history of technological progress - . is at the foundation of long term economic growth easy to see why: all