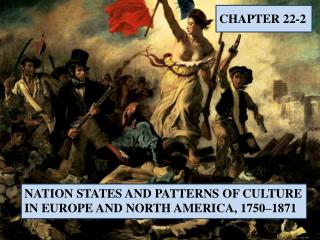 CHAPTER 22-2. NATION STATES AND PATTERNS OF CULTURE IN EUROPE AND NORTH AMERICA, 1750–1871. Ethnic nationalism drew on Enlightenment ideas, which recognized a national identity and the right for that nation to exist. Chapter 22 Section 2 - . a business boom. consumer economy. an economy that depends on a large amount of spending by

Chapter 22, part 2 - . the lymphatic system and immunity. the thymus. located behind sternum in anterior mediastinum

Chapter 22 Part 2 - . the industrial revolution. a growing demand for textiles. led to the world’s first large

Chapter 22 Sections 2-3 - . the united states and latin america. the panama canal. the u.s. wanted a short-cut that would

22-2 - . 1. what were some reforms ci xi made and did they completely reform the qing dynasty? civil service exam,