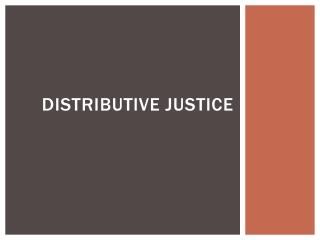 Distributive Justice. A Just Society?. Distributive justice – how society distributes its benefits and burdens: social primary goods - liberty and opportunity, income and wealth, and the bases of self-respect  (e.g., equality of political representation) Juvenile Justice - . english 4. quick write. if you committed a crime and you were under the age of 18, do you think it

DISTRIBUTIVE BARGAINING - . there are two ways in which the parties to the negotiation can try to meet their needs. they

Who is a juvenile or child? - The juvenile justice (care &amp; protection of children) act,2000 prepared by dr

Art for Social Justice - . social justice. the idea of creating a society where all people are equal and deserve equal