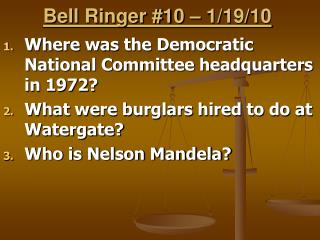 Bell Ringer #10 – 1/19/10. Where was the Democratic National Committee headquarters in 1972? What were burglars hired to do at Watergate? Who is Nelson Mandela?. “The President’s Men”. Small, loyal group of advisors