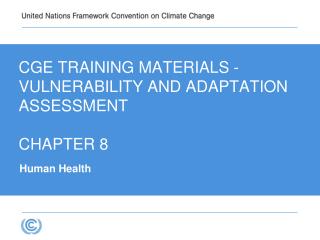 CGE Training materials - VULNERABILITY AND ADAPTATION Assessment CHAPTER 8. Human Health. Objectives and Expectations. Having read this presentation, in conjunction with the related handbook, the reader should: Have an overview of drivers and their potential impacts on human health Adaptation and vulnerability, polymorbidity - Manifestation of novel social challenges of the european union in the