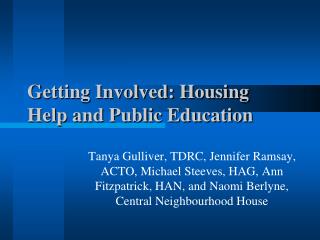 Guidance for PHAs: Required and Voluntary Conversion of Public Housing Units - “a toolkit for change: from removal to

DEPARTMENT OF HOUSING - . presentation to the select committee on public services (national council of provinces) 18 may

Hormesis: What it Means for Toxicology, the Environment and Public Health - . edward j. calabrese, ph.d environmental