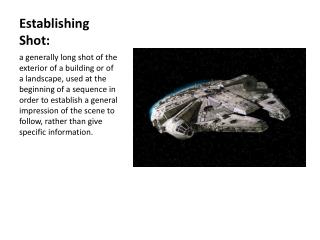 Establishing Shot:. a generally long shot of the exterior of a building or of a landscape, used at the beginning of a sequence in order to establish a general impression of the scene to follow, rather than give specific information. Long Shot:. Guidelines to Win Shot Put Game - Shot put is one such track and field sport that was held in olympic. in this occasion,

Shot &amp; Jot - . mission statement. the mission of the shot &amp; jot app is threefold: to provide a credible

Cinematic Level - . framing. how the object in the shot will be positioned and filmed. how much of the frame of the

Trapped Shot List - . by mary bell, amy parnell, hayley collins and vienna sanderson. the establishing shot of where the

Camerawork - . shot types, angle and movement. framing. long shot- when the camera takes a shot of the entire object or

BrideEile - . story board . shot 1. the first shot is showing a range of bridesmaids dresses from our bridal store. shot

Slap Shot - . by dave tempke. (morgen, 2009). the slap shot is the most dynamic and complex shot that there is in the

Types of shots - . shot/take: a strip of film produced by one continuous running of the camera (24 frames per second).