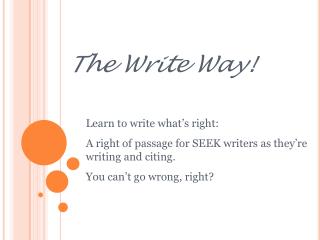 Learn to write what’s right: A right of passage for SEEK writers as they’re writing and citing. You can’t go wrong, right?. The Write Way!. LI: To discuss features of a recount and practice using them - Recounts. how to write a successful one!. . . . .

Lesson Aims - Talking in whispers planning a critical essay. lesson objectives. learn to write about textslearn how to

How to Write More - . more often, more detail, more elaboration. how to write about anything, anytime, anywhere. think,

How to write an application; and how it will be judged - . mats larsson fysikum stockholm universitet. outline. why do we

The Write Way! - Learn to write what’s right: a rite of passage for advanced english 8 writers as they’re writing and

Write, Write Baby! - . alright, stop! elaborate and listen, 4th grade is back with a brand new convention. someone, grip

Quick Write #1 - . directions: write a narrative about something that happened in the past or compose an original story

Read, Write, Inc! - . an introduction to the teaching of reading and writing at wellow primary school.

We’re all writing! - . what should i write?. what are the rules?. you may write anywhere in the room as long as miss c.

Quick Write #1 - . directions: write a narrative about something that happened in the past or compose an original story

2 Truths and a Lie - . on your index card write your name at the top write 2 true statements about yourself write 1 false