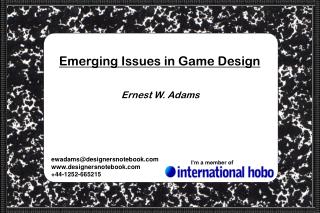 Emerging Issues in Game Design. Ernest W. Adams. Disclaimers. Most of my speaking and writing is about emerging issues in game design in one way or another. This lecture is a compendium of snippets from others delivered over the last several years. Genre-Specific Game Design Issues - . action games. the general idea is to keep the player moving and involved at all

Emerging issues in Indonesia - . transitional phase: problems of capacity at both government and civil society some