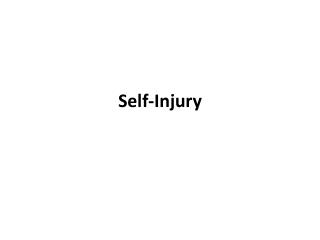 Self-Injury. What is self-injury?. self-injury typically refers to a variety of behaviors in which an individual intentionally inflicts harm to his or her body for purposes not socially recognized or sanctioned and without suicidal intent (Favazza, 1996). Types of self-injury. Self Injury - . what students need to know. often , people say they hurt themselves to express emotional pain or feelings

Self-Injury - . also known as self-mutilation. what is it. self-injury involves intentional burning, punching, and

Self Injury - . self-injury is also termed self-mutilation, self-harm or self-abuse. the behavior is defined as the

Self-Injury : Cutting - . a workshop for teachers. what is self-injury?. typically refers to injuries administered

Intro to Self Injury - Essential question: how can we identify teenagers with mental disorders and what strategies can we

Self Care Without Injury - . canadian counselling and psychotherapy association (ccpa) annual conference may 11-14, 2010

Bullying and Self-injury - . what have we found so far ? emma brown and the youth wellbeing study. how common is

Cutting among Adolescents aka Self-injury - . zena edwards michael varady june 10, 2005. what do these people have in