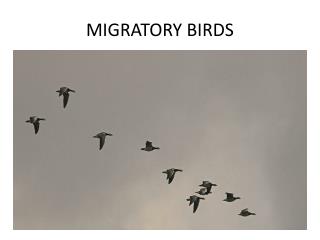 MIGRATORY BIRDS. WHY DO BIRDS MIGRATE?. Bird migration is the regular seasonal journey undertaken by many species of birds . Bird movements include those made in response to changes in food availability, habitat or weather. Assessing Project Related Impacts to Migratory Birds - . the fish and wildlife service has a mandate and a trust

Migratory Birds in Idaho Who, Why and How? - . terry rich u.s. fish and wildlife service partners in flight. what is

Threats to Migratory Birds (click on each for details)

Implementing Conservation Measures to Reduce Impacts to Migratory Birds - . managing exposure. we cannot change how a

Executive Order 13186 Responsibilities of Federal Agencies to Protect Migratory Birds - . does the mbta apply to federal

Migratory Routes - . migration habits differ not only among species but also among different populations of the same

The Migratory Fishery - . topic 2.5. markets for fish. an inshore fishery. cod was the only important species in early

Birds - . of a feather flock together. haliaeetus leucocephalus (bald eagle). introduction of birds with some important

BIRDS - . arizona is blessed with over 500 species of birds , with about 10% of these being permanent residents. a birds