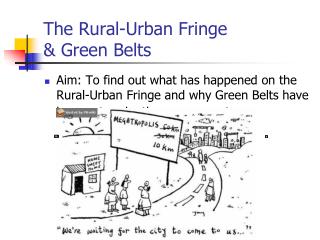 Urban to Rural Evacuation - Definition. urban to rural evacuation:the spontaneous movement of a population from an urban

Growing Leon - . the urban service area why limit the size of the usa ? what do we know about population accommodation?

Urbanisation - . out of town sites and the greenfield-brownfield debate. today we are going to talk about …. ..the

Unit 19 Urban and Rural Worlds 城镇与乡村 - . i. topic transformations taking place throughout the world in urban

Mapping the Rural-Urban Interface: A New Frontier in Rural-Urban Research - Presented at the annual conference: national

Coaching Green Belts - . welcome exercise. think of someone who has been a great coach or mentor to you – personally or

Renewal of urban – rural relationships: the key role of food - . a food strategy for the amsterdam region cemr