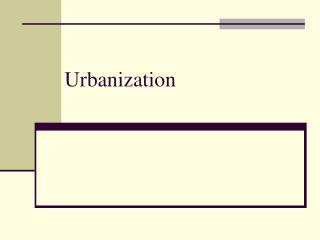 Unit 4-1 Exam Questions - . directions. click the indicated icon to begin the slide show press the right arrow key on the

Urban Patterns - . chapter 13. urbanization. def .- the process by which the pop. of cities grows made up of 2 factors an

The Growth of Cities - . “the nature of urban sprawl: the process of suburbanization” annual meeting association of

What is the cost of Progress? - . progressive era us history alameda high school. 1890-1920. at home unit: gilded age

The Great Transformation - . industrialization in europe. characteristics of this great transformation. new sources of