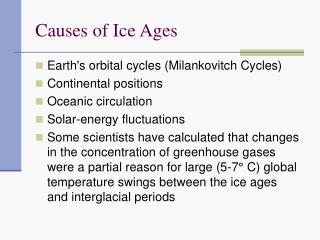 Ice Ages - . 15.3. ice ages. ice ages an ice age, or glacial period, is a long period of climatic cooling during which

Ice Ages - . effects on climate, weather, &amp; geography. ice age. referring to a long period of time in the

Pleistocene Ice Ages - . a glacial world 21,000 yrs ago. insolation levels were the same as today. this seemingly

Ice ages of the Pleistocene - . there is field evidence for glaciation major northern hemisphere glaciation began about

What causes ice ages to occur about every ~100,000 years? - Evidence for ice ages over the last 2.5 myr changes in ice

Glaciers and Ice Ages - . by: briana brandt and lindsey kosinski. what is a glacier?. glacier: a massive,

Ice Ages and Climate Change - . chestnut ridge, ny jan 23 in the year 16,004 bc. four questions of climate change. what

Solar Variability (?) and Ice Ages - . most sunlike stars are variable. our sun does have some poorly understood