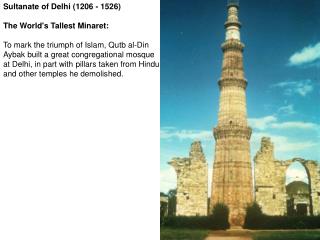 Sultanate of Delhi (1206 - 1526) The World's Tallest Minaret: To mark the triumph of Islam, Qutb al-Din Aybak built a great congregational mosque at Delhi, in part with pillars taken from Hindu and other temples he demolished. The period between 1206 AD and 1526 AD in Indian History is known as the Delhi Sultanate. - The delhi sultanate. the

How has the situation changed with the Muslim invasions? - Muslim arab invasions from the 8 th century onwards main