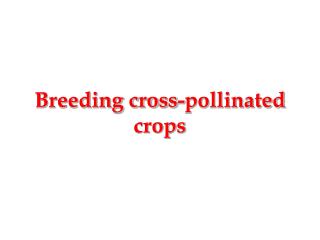 Some Crops pollinated by Bees - . the honeybee is nature's &quot;workhorse — and we took it for granted... we've

Building Community around Pollinated Content - . upload your creature and send him on an epic journey into the spore

How a Flower is Pollinated - . the purpose of all flowers is to be pollinated and produce seeds. what do petals do?.

Crops - . two types of crops subsistence cash subsistence crops are crops that are grown for the producers family or

crops - Vocabulary. crops. now that spring has arrived, the farmer is busy planting his crops. plants grown for food or

Cereal Crops - . rice, maize and sorghum. cereals- the worlds staple foods. cereals are all members of the grass

GM crops - . gmo expansion in the world after 12 years of commercialisation: 4 crops, two traits and just a few

Selective Breeding - . selective breeding is when humans choose a specific organism (that have special traits) and