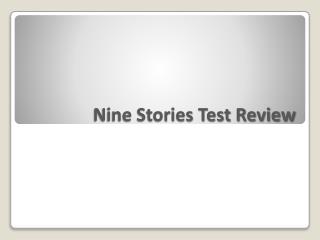 Chapter Nine Review - . taylor paul heather. a statistic is a number that describes a sample. you use a statistic in

Chapter Nine Review - . mrs. cavell honors us history progressivism. 13. which of the following was not a traditional

Third Nine Weeks Review - . which organelle produces most of the energy needed by a cell? a. mitochondria b. chloroplasts

F irst Nine-Weeks Review - . directions: in your “warm-up” section of your journal, write the answer(s) in complete

3 rd Nine Weeks Review - . math 7. problem #1. which answer is an example of a dilation of the figure below?

Test Review - . brsm, trifles, the lottery. brsm. know the vocabulary who are the two main characters in this story? what

Test Review - . question #1 what determines the pitch of a note – its amplitude, frequency, or wavelength? do not show