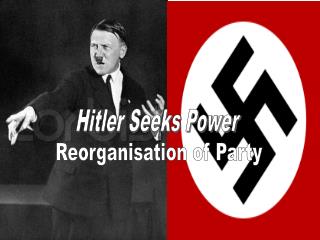 Hitler Seeks Power. Reorganisation of Party. Creating a National Party. Germany had changed by the time Hitler was released from Landsberg Prison. The economy had improved. Political situation had calmed. Mein Kampf. Hitler In Power - . to learn about hitler’s early policies to understand how hitler consolidated his power. create a

Hitler Consolidates Power - . how did hitler consolidate power?. between march and july 1933—all political parties

Hitler Comes to Power - . introduction. in the early 1930s, the mood in germany was grim because of the depression

How did Hitler consolidate power ? - . lo: to examine the significance of the reichstag fire and enabling act. who are

How did Hitler consolidate power? - . l/o – to identify the key events that helped hitler to establish his

Why did Hitler Come to Power? - . www.educationforum.co.uk. versailles. deep anger about the first world war and the

Why did Hitler come to power? - . l.o. to examine causes and significance. to produce a mind map on the life and rise

How Did Hitler Rise to Power? - . ian hill. where did hitler’s party begin?. in 1919 hitler joined the german

How Did Hitler Come To Power - . hitler’s rise to power. based on many factors resentment of the german people weakness

Hitler - . connector. write down everything you associate with this man. outcomes. to know who adolf hitler was and his

Hitler - . overview. hitler did a lot of bad stuff mein kampf is very interesting. hitler wrote a blueprint of what he