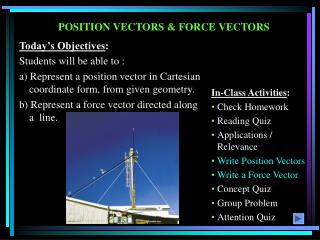 POSITION VECTORS & FORCE VECTORS. Today’s Objectives : Students will be able to : a) Represent a position vector in Cartesian coordinate form, from given geometry. b) Represent a force vector directed along a line. In-Class Activities : Check Homework Reading Quiz 2 Force Systems - . force, moment, couple and resultants. force definition. force is an action that tends to cause

Chapter 3. Vectors and Coordinate Systems - . our universe has three dimensions, so some quantities also need a direction

Prelude - . a pattern of activation in a nn is a vector a set of connection weights between units is a matrix vectors and

Vectors.. - Vectors. vectors: notations. a vector in a n-dimensional space in described by a n-uple of real numbers. x 2.

2. Differentiable Manifolds and Tensors - . 2.1 definition of a manifold 2.2 the sphere as a manifold 2.3 other examples