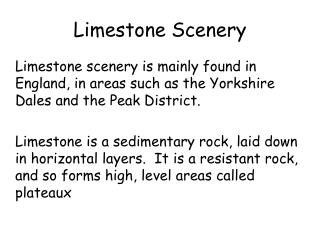 Limestone Scenery. Limestone scenery is mainly found in England, in areas such as the Yorkshire Dales and the Peak District. Limestone is a sedimentary rock, laid down in horizontal layers. It is a resistant rock, and so forms high, level areas called plateaux. LIMESTONE SCENERY - . read the relevant section in the booklet that complements these slides. we will not be referring to

HIGHER GEOGRAPHY LITHOSPHERE LIMESTONE SCENERY - . there are several types of limestone in britain - this presentation

Limestone - . . what is limestone?. limestone is made up of the shells of millennia old dead sea creatures. layers of

Natural Scenery - . our earth is full of beautiful scenery . here are some of the words you will ever need to describe

Limestone - . limestone is a sedimentary rock it is mostly made up of the compound calcium carbonate. buildings. making

Limestone - . limestone. limestone is a sedimentary rock composed largely of the minerals calcite and aragonite, which

Limestone - . limestone . learning objectives: what is thermal decomposition? the reaction of quicklime with water know

SCENERY DESIGN - . the purpose, procedures, and techniques for stage scenery. purposes of scenery. the most important

Scenery Descriptions - . creative writing mr. way 9-25-13. notice:. on friday, i will be collecting everything we have

Moving Scenery - . when we make a platform that rolls it is called a wagon. some wagons are exactly the size of the item