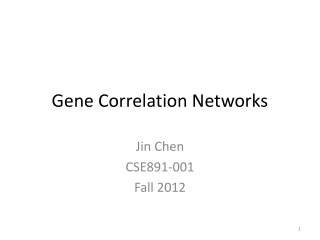 Gene Correlation Networks. Jin Chen CSE891-001 Fall 2012. Gene expression. Gene expression is the process by which information from a gene is used in the synthesis of a functional gene product It is used by all known life. Reconstructing Gene Networks - . presented by andrew darling based on article “research towards reconstruction of gene

Environmental Influence on Gene Networks - . lesson 1: introduction. created through a partnership between teachers,

Bayesian Networks &amp; Gene Expression - . a ij - the mrna level of gene j in experiment i. the problem. genes.

synthetic gene networks that count - . lv chenchen. a counter!!. a counter is a key component in digital circuits and