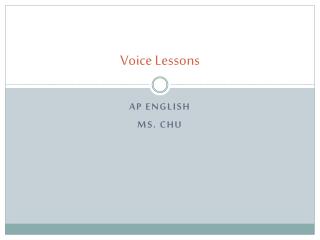 Voice Lessons. AP English Ms. Chu. Introduction to Diction. Diction refers to the author’s choice of words. It is clear, concrete, and exact. In other words, it says exactly what you want it to say, is specific, and creates just the picture you see in your mind. Voice Lessons - . “today you are you, that is truer than true. there is no one alive who is youer than you .” “your

Voice Lessons - . finding our voice. diction. an author’s choice of words choice of use and words in speech or writing

Voice Lessons - . a study of diction, detail, imagery, syntax , and tone. voice. you learned to analyze voice when you

Voice lessons - The kids tap dance nyc not only concentrating on developing the dance skill in kids, but they also

Voice Lessons – Tone - . understanding voice in literature and using it in your own writing. adapted from nancy

Voice Lessons…Diction - . diction (word choice) is the foundation of voice and contributes to all of its elements. by

Imagery: Voice Lessons - . imagery- 1. consider: the many men, so beautiful! and they all dead did lie: and a thousand

Imagery: Voice Lessons - . ap literature and composition. imagery- 1. consider: the many men, so beautiful! and they all

Voice Lessons: diction - . diction-1. consider: “art is the antidote that can call us back from the edge of numbness,

Voice Lessons Winnipeg - If you are looking for the best voice lessons winnipeg, then you are at the right place.