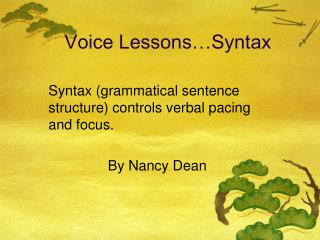 Abstract Syntax - . cmsc cs431. abstract syntax trees. so far a parser traces the derivation of a sequence of tokens the

The Lee Silverman Voice Treatment (LSVT) Approach - . presented by: kim miesen november 24, 2004. what is the lee

Laryngitis - . swelling and irritation/ inflammation of the voice box/ larynx and is usually associated with hoarseness

Syntax-Directed Translation - . grammar symbols are associated with attributes to associate information with the

Class-X - . grammar. the path to effective writing. understanding active and passive voice. verbs and voice. voice is the

Class-X - . grammar. the path to effective writing. understanding active and passive voice. verbs and voice. voice is the