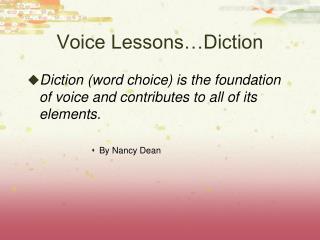 Voice Lessons…Diction. Diction (word choice) is the foundation of voice and contributes to all of its elements. By Nancy Dean. Diction : “ High Tide in Tucson” Art is the antidote that can call us back from the edge of numbness, restoring the ability to feel for another. . Static Electricity Lessons - . the following power point is designed for teachers to use to plan inquiry-based static

Diction - . t he choice and use of words and phrases in speech or writing or the overall enunciation of one’s speech.

Voice over IP Protocols - . an overview. what is in this module. module title: voice over ip protocol – an overview.

WAGGGS VOICE - . a voice is. representative spokesperson. sound expression-communication. the right to express a choice.

THE PASSIVE VOICE - . passive voice does not mean “past tense.” there are 2 voices of verbs in latin: active voice

Diction - . complexities of language. could've but didn't …. literary artists (the good ones at least) choose their