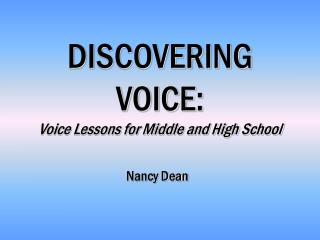 Voice and the Teacher - . matt sheppard. voice and the teacher. aims of the session to raise awareness of the link

Passive Voice - . caleb, aziz and alex. what is passive voice?. passive voice is a voice in which the subject is the

Active &amp; Passive Voice - . understanding a writer’s tone. passive voice. although the passive voice is not any

THE PASSIVE VOICE - . passive voice does not mean “past tense.” there are 2 voices of verbs in latin: active voice

Voice Lessons – Tone - . understanding voice in literature and using it in your own writing. adapted from nancy

The Human Voice - . uniqueness of the voice. your voice is like a finger-print….though similar to others, no two are

WAGGGS VOICE - . a voice is. representative spokesperson. sound expression-communication. the right to express a choice.