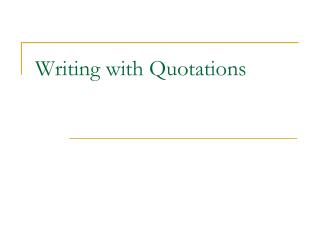 The TCAP Writing Assessment - . preparing students for common core writing and parcc. session objectives. the past:

Using the Writing Studio to Extend and Enhance the Environment of Your Writing Class - . telecoop 2007. who am i?. jill

Clinical Writing for Interventional Cardiologists - . what you will learn - hopefully!. introduction general principles

How to use quotation marks in English Writing? - Just as tricky english grammar rules are, it is difficult to determine