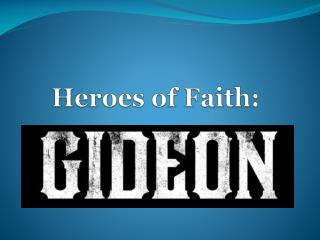 Heroes of Faith A New Beginning - . it all begins with jesus. overview. some of the things we will learn in this series:

FAITH MADE PERFECT - . the development of abraham’s faith genesis 12-25. faith must grow. faith can be made perfect by

Heroes - . (no, not the tv show). heroes. what is a hero? someone who represents the highest ideals, or what we would

Heroes? - Tfl dacw. heroes?. day 1 – heroes ? read as a class. -jodi oakes was driving to see a friend after work, when

Faith &amp; Christianity - . thesis faith is an active trust in what you have good reason to believe is true. faith

Heroes - . who am i? 1) i was born in india in 1910. i ensured millions of poor and vulnerable people were being cared

Heroes - . why do superhero movies do so well? why do we want heroes to be real?. what kinds of people are celebrated as

Faith &amp; Christianity - . thesis faith is an active trust in what you have good reason to believe is true. faith

WHO ARE MY HEROES? - . example provided by: michael sahota. at first i thought, i don’t have any heroes. but then my