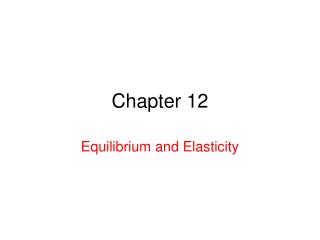 Chapter 12. Equilibrium and Elasticity. 12.1 Physics and Equilibrium. What allows objects to be stable in spite of forces acting on it? Under what conditions do objects deform?. 12.2 Equilibrium. The two requirements for the state of equilibrium are: