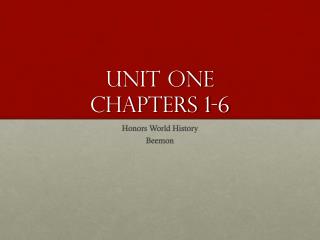 Unit One Chapters 1-6. Honors World History Beemon . Standard. SSWH1 The student will analyze the origins, structures, and interactions of complex societies in the ancient Eastern Mediterranean from 3500 BCE to 500 BCE. Unit 1 Chapters 4,5,6 - . an empire in transition. questions to think about. how did the seven years’ war change the

Part One: Chapters 1-4 - . who is telling the story? when and where does the story take place? what has changed hugo

Unit 3 Chapters 5 and 6 - . the thirteenth colony. the silk road. marco polo. “the silk road”. land route over the

So Far: Chapters 1-6 - . name three reasons why stradlater annoys or upsets holden (either stradlater’s actions or

Review of Chapters 1- 6 - . we review some important themes from the first 6 chapters introduction statistics - set of

Chapters 6 - . sensation. chapter 6 - sensation. overview. in this chapter we will be focusing on our “input