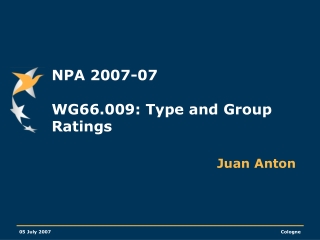 NPA 2007-07 WG66.009: Type and Group Ratings. Juan Anton. Current requirements. Currently in Part-66, for the purpose of endorsing aircraft type ratings on the aircraft maintenance licences, aircraft are classified as (see Appendix I to AMC to Part-66): XTrends Ratings Analysis Software - . here is a brief look at xtrends and why xtrends is one of radio’s most preferred

Ranking versus Ratings - . (from krosnick, 1999) historically rankings had higher validity than ratings ratings are much

Prospect Ratings Demystified - . or how to read that “stuff” in wizard. special thanks. lai lonne fong dorothy u.

CERTIFICATIONS AND RATINGS - . 3. slide header copy. in this chapter. sustainable building certifications and ratings the

PERFORMANCE RATINGS IN THE EMPLOYEE INFORMATION SYSTEM AND NEW WEB FORM - . may 2008. joel i. klein, chancellor.