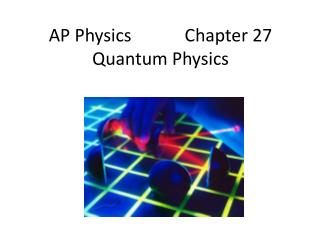 Physics Ch 1 - . what is physics?. physics is much more than equations and numbers. physics is the branch of knowledge

Quantum Physics - . objectives: after completing this module, you should be able to:. discuss the meaning of quantum

Chapter 29 - . particles and waves. there is nothing new to be discovered in physics now. all that remains is more and