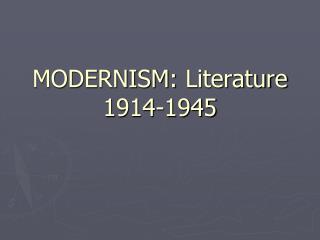 Cold War and Decolonization 1945-1989 - . sswh19 the student will demonstrate an understanding of the global social,

Modernism - . magonara luca alvise. a literary movement developed during 1900 and 1930 reached its height with authors

Modernism - Getting to know…. modernism. first… a

Modernism - . 1914-1939 . what is modernism?. modernism is a cultural movement that  includes the progressive art and