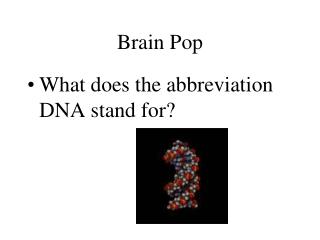 Brain Pop. What does the abbreviation DNA stand for?. 1. DNA. 2. DNA. DNA stands for deoxyribose nucleic acid. This chemical substance is present in the nucleus of all cells in all living organisms. DNA controls all the chemical changes which takes place in cells. Brain POP - . a curriculum initiative by kathleen mihok. what is brain pop?. brainpop is animated, curriculum-based

Brain Pop: Clouds - Cloud types 18.3. brain pop: clouds. 18.3 types of clouds clouds are classified based on how they

This is brain pop - . marco polo. you look hungry moby, what do you say we get something to eat?. bee-beep. hey did you

Science brain pop quiz on currents - . team: abhinav , brooke berstien , danniele , and arnav this is the quiz for our

“Phases of W ater” Brain pop - . draw a picture of h20 molecules in a gas, liquid, and solid (in that order) act it

DO NOW (BRAIN POP) page 50/52 - . write the questions and the answers what is the difference between rotation and

pop pop ret… - . a session on getting your sploit to exploit. what’s the master plan again?. introduction (a repeat

The iron pop-pop - To wish you a merry christmas and happy new year, i have selected a pop-pop boat that differs from any

POP - . solving problems. what’s the problem?. first, you must identify the problem to address. then, consider as many

Pop - . 1950’s – present from the word popular usually classified by decade culmination of many styles into one focus

Brain pop What happens to rainwater after it reaches the Earth’s surface? - . storage. evaporation and transpiration