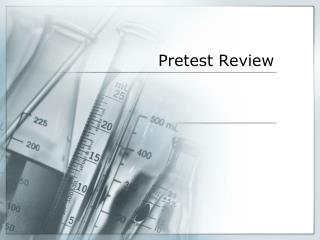 Studio In Art Pretest REVIEW pretest given 10/2/13 - . use this presentation to accompany your written pretest to study

Pretest - . chapter 1. 1. true or false: science and technology are not related. 2. which of the following are areas of

Pretest - . 1. what is relative motion? 2. what is the difference between distance and displacement? 3. how is average

Pretest - . the transfer of genetic information from the nucleus to the ribosome is a function of:. dna molecules

Pretest - . 1. fill in the conjugation chart with all the subject pronouns. 2. translate this sentence into spanish:

Pretest - . please complete the pretest for this standard on your own . try to remember all you can from our first

Pretest - . chapter 15. 1. how much work is done when a weightlifter holds a barbell motionless over his head? 2.

Pretest - . chapter 10. 1. according to the law of conservation of mass, if element x has a molar mass of 3 g/mol, and

Verb Pretest - . there will be things in the test that are unfamiliar to you. make the best educated guess. this is only

Evolution Pretest - . prepare to take a pretest! please put everything away except for a pen. april 23, 2012. challenge :