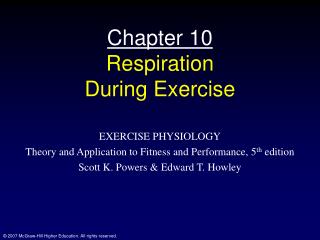 Respiration During Exercise - . objectives . explain the principle physiological function of the pulmonary system.

RESPIRATION DURING EXERCISE - . changes that occur in respiration during exercise. effect on pulmonary ventilation. 1.

Respiration During Exercise (1) - . pulmonary ventilation (v) . the amount of air moved in or out of the lungs per

Exercise and Respiration - B4. exercise and respiration. define vo2 and vo2max. vo2 – an expression of the rate at

CHAPTER - 10 RESPIRATION IN ORGANISMS - . 1) why do we respire ?. we respire to get energy from food. food contains

Exercise During Pregnancy - . pregnacy and exercise. exercise has become a vital part of many women's lives the

Exercise 10 - . no.1. (worse) while the ga method searches along the contour of the optimized function, it makes no

Exercise 10 - . no.1. (worse) introduction of the mrsn ratio is possible by integration of the quality loss for all

Cardiovascular Control During Exercise - . learning objectives. review the structure and function of the heart, vascular