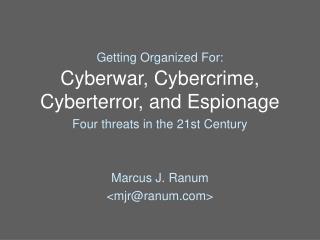 Cyberwar, Cybercrime, Cyberterror, and Espionage. Getting Organized For:. Four threats in the 21st Century Marcus J. Ranum <mjr@ranum.com>. Who am I?. Author of “The Myth of Homeland Security” Industry “insider” with over 20 years work in security System designer Teacher Cybercrime - . a global overview of the role of internet service providers in assisting law enforcement and public safety

cybercrime - This is about

CYBERCRIME - . cybercrimes reach everywhere and hurt everyone: electronic commerce crime (like the theft of hundreds of

Chapter 10 - Securing Information Systems - . is security is a critical aspect of managing in the digital world. chapter