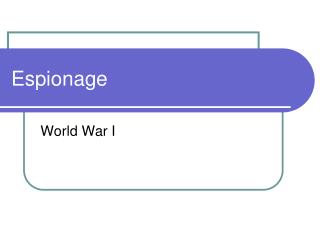 Espionage. World War I. What is Espionage?. Intelligence activity that denotes the work of secret organizations whose task is to gather information by covert means. Divides into 2 kinds of material and activities: foreign intelligence, and domestic intelligence. Espionage Trials and Cultural Shifts - . in the 1950’s, fear of nuclear war and fear of communist agents was combined

Espionage During the Cold War - . after the end of world war ii the world was split into two; east and west. this marked

A Corporate Counter-Espionage Approach - Bolstering the human firewall . presented by joel krauss. be prepared. for

Cyberwar, Cybercrime, Cyberterror, and Espionage - . getting organized for:. four threats in the 21st century marcus j.

Protecting against computerized corporate espionage - . how to harden your corporate practices. jarno niemelä