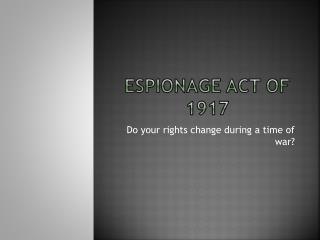 Espionage Act of 1917. Do your rights change during a time of war?. First Amendment. The Selective Service Act 1917 - . the draft. when the united states first entered world war i, the total size of the us

The Military Services Act 1917 - . called all fit males 18-45 to register exceptions: those for whom service would cause

1917 - . an important year. russia surrenders. the tsar nicholas ii had become very unpopular he was an autocrat (all

Battle of Arras 1917 - . the experience of scots on the western front: the battles. denny high history department.

The Constitution of 1917 - . carranza and the constitutionalists. fall 1916. carranza issues call for the election of