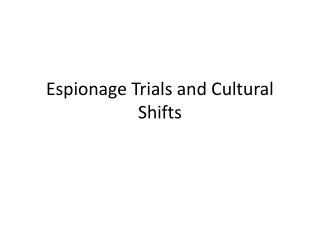 Espionage Trials and Cultural Shifts. In the 1950’s, fear of nuclear war and fear of communist agents was combined in a pair of key espionage trials In 1948, Alger Hiss was accused of spying for the Soviet Union Hiss was a former State Department official Hiss was convicted of perjury Cultural Shifts After WWI - . postwar pessimism. the brutal realities of industrialized warfare brought about a shift in

Cyberwar, Cybercrime, Cyberterror, and Espionage - . getting organized for:. four threats in the 21st century marcus j.

Datums and Shifts - . most coordinate systems are referenced to a specific datum mix two different datums for the same

Shifts - . prepared by sapdc learning facilitator team. around the world, jurisdictions are exploring how to transform