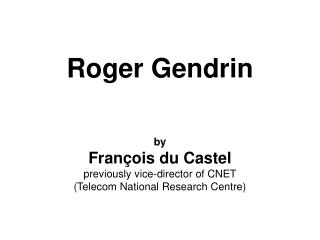 Roger Gendrin. by François du Castel previously vice-director of CNET (Telecom National Research Centre). I will limit my talk to the period where we were together: 1961 when Roger came in at CNET 1971 when I leaved space research Roger Federer - . roger federer was born on august 8, 1981. he is a swiss professional tennis player, ranked world no. 1

Captain roger - Https://www.89slotxo.com/ online slots games today i can say that every slot game can be on all. plus,

Roger fenton - . by hannah and alexander . who is