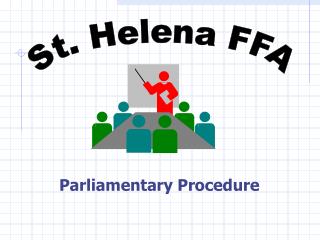 St Helena Experiment - . cas and sami. what was it?. investigating the effect of television on the aggression of children

FFA - . what you need to know to become a successful member!. emblem. consits of 5 symbols these symbols represent

ffa - . begin ffa slide test # 1. the main goal of the ffa is to develop these three things. premier leadership personal

Helena Schreibman - . miss. joansie . what your favorite animal?. she really like cats. what music do you like the most?.

um-helena - Welcome to um-helena. teaching at um-helena can be rewarding and challenging. we hope that you find the

Helena Stollenwerk - Missionary and mystique. helena stollenwerk. from the personal holiness of helena, the key ideas of