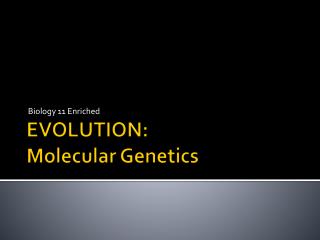 MOLECULAR GENETICS - . the chemical nature of the gene. © 2007 paul billiet odws. what does a gene do?. the must be able

Molecular Genetics - . there’s two critical functions a cell must perform during its lifetime. 1. a cell must divide

Molecular Genetics - . the central dogma of biology!. f irst…. a few more thoughts about replication. when dna is