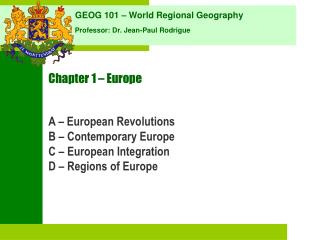 Chapter 1 – Europe. A – European Revolutions B – Contemporary Europe C – European Integration D – Regions of Europe. Europe. Why begin with Europe? Western extremity of Eurasia 3% of the world’s land surface. Maximum efficiency for contact with the rest of the world. Chapter 2 The sources of the English Vocabulary - . the english people are of a mixed blood. at the beginning of the

Chapter 7: History of the Islamic World - . review game. question 1:. why do geographers call arabia a “crossroads”

WEDNESDAY 1.22 - . bell ringer #1. locate the following: the netherlands are located east of ____ and within the