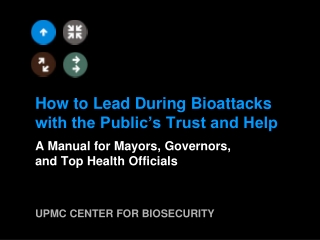 How to Lead During Bioattacks with the Public’s Trust and Help A Manual for Mayors, Governors, and Top Health Officials. UPMC CENTER FOR BIOSECURITY. Presentation Overview. Purpose – Anticipate and Avert Governing “Trouble Spots” that Arise during Epidemics. UPMC CENTER FOR BIOSECURITY - How to lead during bioattacks with the public’s trust and help a manual for mayors,

UPMC Matilda Theiss Health Center - . our story january 2012. who we are. upmc hospital-based clinic only federally

Biosecurity - . what can a grower do? anthony pescatore extension professor university of kentucky. biosecurity. to

Biosecurity for Aquaculture Facilities - . biosecurity. practices, procedures and policies to prevent introduction and

Poultry Biosecurity - . what is biosecurity?. biosecurity: addresses measures that should be taken to keep any

Biosecurity Basics - . john waddell dvm,mba. the first step. commitment to a common cause our livelihood depends on it it

Biosecurity for the Livestock Enterprise