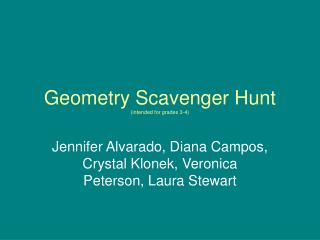 Geometry Scavenger Hunt (intended for grades 3-4). Jennifer Alvarado, Diana Campos, Crystal Klonek, Veronica Peterson, Laura Stewart. Point. A point is a very small dot or a spot where two or more lines meet. These are several points that can be found on the balcony of SCAVENGER HUNT - . 1. in the search box, write infectious diseases, then click go 2. then click on national center for

SCAVENGER HUNT - . scavenger hunt. 4 hubcaps. -all of these hubcaps have similer parts. -for example -circles -dots -one

Geometry Scavenger Hunt Examples - . the lumar building on the corner of sixth and central in

Holocaust Scavenger Hunt - . directions:. there are frequently asked questions about the holocaust that most students