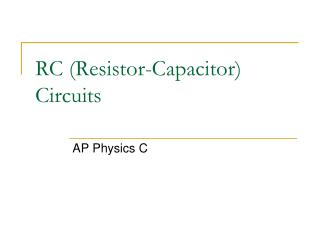 RC (Resistor-Capacitor) Circuits. AP Physics C. RC Circuit – Initial Conditions. An RC circuit is one where you have a capacitor and resistor in the same circuit. Suppose we have the following circuit:. Purpose of this Minilab - . learn about charging and discharging of a capacitor through a resistor. learn how to build a

Week 9: Series RC Circuit - . experiment 14. circuit to be constructed. it is good practice to short the unused pin on

Electronics - . chapter 12. o bjectives. identify the value of resistors based on the resistor color code state the