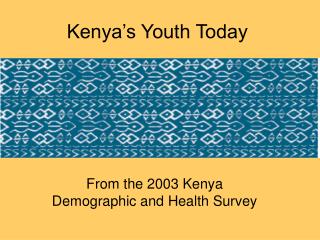 Kenya’s Youth Today. From the 2003 Kenya Demographic and Health Survey. There are --- million young people (age 15-24) in Kenya today. Inspirational Quote Here. Presentation Outline. Picture of Kenya’s youth today Growing up in the shadow of HIV/AIDS Dr. Steve Parese Danbury, NC - Leave me alone!”. getting through to traumatized youth. insights and strategies for

CHALLENGES IN PRODUCTION AND MARKETING OF MANGOES IN KENYA - Fundamental questions. where does mango production take

THE STATUS OF THE MICROFINANCE INDUSTRY IN KENYA - . presented at the 5 th afraca microfinance forum 2 nd - 4 th july

Meeting the Educational Needs of Children and Youth Who Are Homeless or in Foster Care - . who are the children and youth