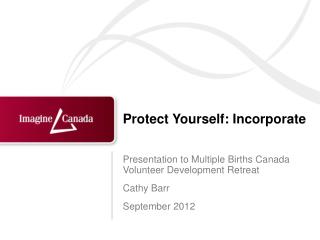 Protect Yourself: Incorporate. Presentation to Multiple Births Canada Volunteer Development Retreat Cathy Barr September 2012. What Are Your Risks ?. What are some risks faced by your organization ? World War 1 The Great War - . my idiosyncrasies and teaching method you will see the following a lot -- ttyn : talk to

Draping - . what is the purpose of draping?. draping . the drape serves to protect the client from infectious and

GROUNDING 101 - . grounding 101. why do we ground?. safety. protect people. protect equipment from fault currents. why

Power to Protect: Preventing Child Abuse and Neglect - . 1. 1. you will be able to: define child abuse and neglect

How we - . recruit . how we. know and incorporate trainee experience. how we. retain. how we. feedback. how we. ensure

Cyber Crime and Cyber Security Tips - Cyber security is very essential part of a business network and a system. in this

CAN WHALING BE MANAGED TO PROTECT WHALES AND WHALERS? - . judith e. zeh chair of the scientific committee (sc) of the