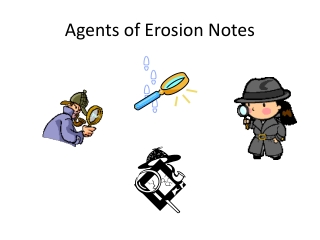 Agents of Erosion Notes. Erosion Caused by… Running Water. Erosion is… The process by which soil & sediment are transported from one location to another. The running water of the Colorado River cut down into the rock and formed the Grand Canyon over millions of years. Agents of Erosion - . goals the learner will be able to: define weathering, erosion, and deposition. name the four agents

EROSION NOTES - . erosion : the process by which weathered rock and soil particles are moved from one place to another.

Agents of Erosion TAG Earth Science - . a webquest. write this in your agenda. homework for tonight: complete question

Chapter 7 Notes Section 3 Soil Erosion - . use pages to fill in these notes. 1 - soil erosion is important because losing

Notes 7: Logic and Logical Agents - . rules of inference. the party example. if alex goes, then beki goes: a ï‚® b if

Erosion of Soils - . by ronald r. maharaj. what is soil

EROSION - . what is erosion?. during erosion, soil or rocks are carried away to a new place by moving water. what are the

Erosion - . yg erosion team carson. the problem. there are area’s at our school that show evidence about water erosion.